While reading a cracking post about the history of the word entrée on Morph, I did a double take on this image.

My surprise had nothing to do with the fact an establishment called The Chocolate Shop was branching out into French dining. Instead, I was intrigued by when the menu became available. 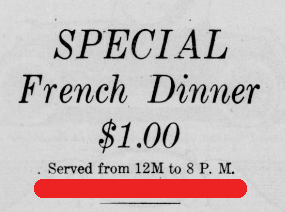 A close up shot of the menu in question

It was the first time I’d ever seen the abbreviation “12 M.” to refer to midday.

The abbreviation a.m., of course, comes from the Latin phrase ante meridiem ‘before midday’1. Conversely, p.m., post meridiem, means ‘after midday’. So what’s noon then? Under this system it’s meridies, something we don’t usually try to abbreviate in English.

In my own experience, people associate 12 p.m. with noon and 12 a.m. with midnight. I agree with them, although I realize it’s just as illogical as the reverse order (i.e. 12 a.m. being noon). The ‘12 p.m. = noon’ interpretation is currently favoured in the guidelines of US Government Printing Office, though this is actually a recent reversal of policy. Past guidelines said the opposite. In short, it’s confusing.

So why hasn’t this thoroughly sensible abbrev. taken hold in the English language? Well, as the Wikipedia entry on 12-hour clocks helpfully reminds us, having m as a way to specify noon “does not resolve the question of how to indicate midnight.” Without a fourth label – for example m.n., media nox – we still don’t have a logical label for the time after 11:59 p.m.

Besides, we can already say 12 noon or 12 midnight to clarify which 12 we’re talking about, leaving out the Latin component altogether. In fact, noon and midnight are descriptive enough on their own. The hour reference is redundant.

Moreover, in contexts where these distinctions genuinely matter – areas like aviation, medicine and the military – a 24-hour clock is already standard. Therefore, I suspect the payoff was never great enough to convince people to use the label.

Hence, as well-intentioned as meridies was, it doesn’t appear to have survived the twentieth century. It would be nice to get some more data on this – e.g. when the term was first used, how popular it was, when it was last used – but it’s too scarce to be found on Google Ngrams and more general searches elsewhere only return results for measurements (i.e. 12 meters).

For now, all I can say is that our time is a post meridies (sic) one.